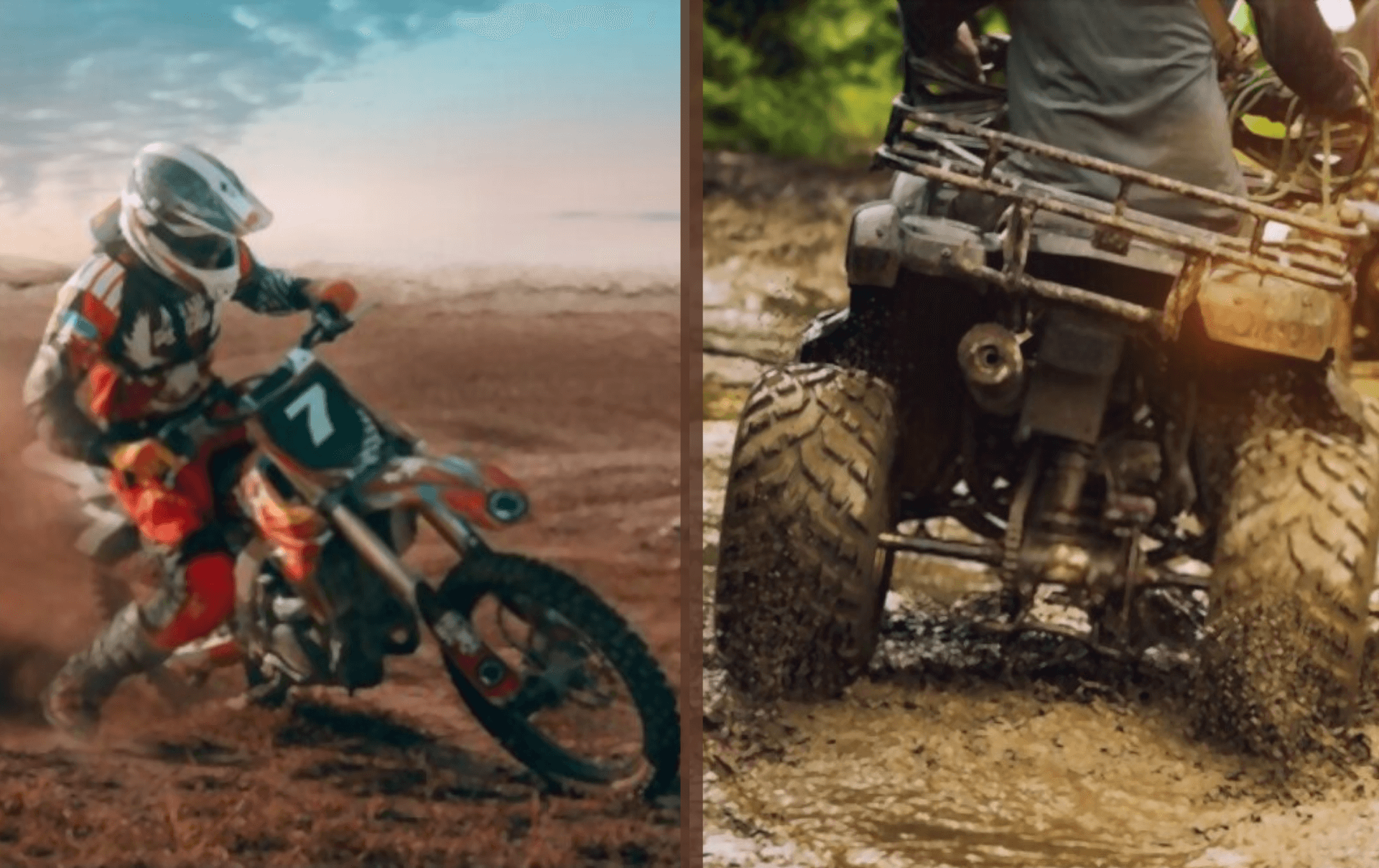 Whenever we go for any off road adventure, sometimes we encounter with the riders who are on their quad bikes, and then the debate starts, which one is better and why? And today we will tell you all the reasons why dirt bikes are better than quads.

Dirt bikes are two-wheelers designed for individual riding across irregular terrains. These bikes are faster and lighter compared to quad bikes while being much cheaper. They are smaller and easy to transport, provide better fuel efficiency, and are more thrilling to ride.

Off-road vehicles are becoming more popular in recent times. The irregular terrain, unpaved roads, and scenic trails not only pose a challenge for riders looking for something different but also provide a thrilling experience in the process.

Off-roading has developed into a competitive sport in recent times, testing driving expertise and skill over some of the most difficult terrains on the planet.

Amateur adventure seekers often get confused about whether to pick a dirt bike or a quad bike for their off-road rides. While both of them are designed for irregular and unpaved surfaces, they both have very different characteristics, making them unique in their own ways.

While the above-mentioned points answer the question well, explaining the details of each point will provide you with more information that will help you make a well-informed decision. Do read on as we dive into the reasons individually.

Dirt bikes are designed for individual use on off-road terrain. As a result, these bikes weigh much lighter than a quad bike. They have just two wheels, a lightweight frame, and good suspension to help them tackle the different off-road conditions.

Being lightweight also means a dirt bike does not need a very powerful engine to get the required minimum power output. Being lightweight, the bikes are also easy to service and repair if and when required. Another advantage due to its weight is easy handling and quick cornering compared to quads.

Quads on the other hand are bulky and heavy. They have four wheels and a large frame, requiring very powerful engines. As a result, they have a complex construction, with skid plates under the chassis to protect the internal components from dirt and debris.

— Also read: Reasons Why are Motorcycles Allowed to be so LOUD?

This makes quads extremely heavy, making it a major inconvenience for individual use. Another disadvantage is while having to service and clean your quad, as the heavy construction will mean you need an extra set of hands to be able to navigate through the complex design.

In the world of automobiles, a powerful engine doesn’t necessarily mean increased speed. The weight of the machine has a direct impact on how fast it is. As mentioned above, dirt bikes are lighter. This means a powerful engine has to propel a lot less dead weight than that of a quad bike.

As a result, you will be able to ride a dirt bike much faster than a quad with a similarly powered engine. Improved cornering and handling characteristics of the bike will also result in riders being able to take corners and turns much faster.

Dirt bikes are also sleek machines, which means they have great aerodynamic efficiency compared to that of a quad. As a result, the effects of drag are much more reduced on a dirt bike, allowing riders to go that much faster.

Dirt bikes are easy to manufacture and require simple components and lesser materials to make. As a result, they are cheaper compared to quads. A new quad bike is almost twice the cost of a new dirt bike with similar engine specifications.

Dirt bikes also have fewer wheels than a quad and with reduced load and stress requirements. As a result, tires are cheaper and provide similar performance at lower costs.

Quads are complex machines. They have advanced suspensions, while their drivetrain systems are 4 Wheel Drive systems. While providing each wheel is very beneficial for off-roading, it is an expensive and complicated system.

The rugged construction of a quad is meant to withstand mechanical stresses in off-road conditions on a regular basis, with increased load capacities to deal with as well. As a result, they have a large number of parts that need to work in unison.

Due to this, design and production costs are much higher, making them an expensive option for many. Even if you can afford the costs of buying a quad, regular servicing and maintenance will work out to be more expensive compared to a dirt bike.

The argument of a dirt bike being safer may not make sense to most riders at first. Dirt bikes are often hard to drive, especially if you are an amateur. Dirt bikes are also quite powerful, and getting a feel for the bike is crucial.

However, once these basics have been mastered, the chances of you getting injured in a crash are far less compared to a quad. Most places require dirt bike riders to have the necessary protection and are strictly enforced.

In the unfortunate instance of a crash, a rider will be protected from impact injuries, as well as injuries sustained from the bike, as they will be flung clear of the bike in most cases. Even if this is not the case, the lightweight frame has a lower probability of causing grievous harm.

Quads on the other hand are advertised as a stable and safe off-road option. As a result, the safety regulations for them are not too stringent. While accidents on quad bikes are rarer, they can be much more serious.

Despite their all-wheel drivetrain systems, they can easily flip under their own weight. This can have devastating results for the rider, with serious back and neck injuries being caused. Being heavy vehicles, quads can also have serious consequences for innocent bystanders if they are stuck in an accident.

Dirt Bikes are Easier to Transport

Imagine wanting to go on a solo off-road trail that is rather isolated. Hauling a quad bike is going to take a monumental effort with you most likely requiring the help of fellow riders.

A dirt bike is going to be fairly easier to transport, considering its lightweight frame. You will be able to transport it with your everyday sedan. Attaching a small trailer to the back will help you tow the bike on public roads with no issues whatsoever.

— Also read: 10 THINGS to Keep in Mind While Motorcycling in the Winter

In case you ride along with a crew, you can load up multiple dirt bikes in a single truck or pick up, helping you reduce the cost of transportation. Quads on the other hand are going to prove a logistical and financial nightmare, which could eventually derail the planned adventure with your friends.

Dirt bikes are compact, lightweight, and easy to handle. They are sleek machines designed to provide grip even on the most slippery and narrow surfaces. As a result, dirt bikes really allow you to push the limits of exploration on off-road trails.

They can help you navigate through a narrow forest, or a mountain pass that can barely accommodate a human being on it. Quads on the other hand are bulky and have wide frames that will prevent you from exploring as much as you may have initially envisioned. If you want to have access to that narrow road not taken, you may have to be on a dirt bike to be able to embark on the adventures it leads to.

Dirt bikes are lighter, faster, and allow you to explore some difficult off-road trails. As a result, they have a much more thrilling experience. A quad is more functional in nature, helping you transport equipment and luggage with ease.

A dirt bike requires a great deal of rider skill and awareness, considering the tricky conditions a rider encounters on uneven terrain. A rider will also have to keep their body positioning in mind, having to maintain their balance while taking sharp corners.

This means a rider is constantly on the edge, which adds to the thrill of it all. Their lightweight design also makes them ideal for stunts and jumps, taking advantage of their great suspension systems in the process. Experienced riders can even perform flips and high jumps on these bikes, making it the perfect vehicle to fuel an adrenaline rush.

While off-road vehicles are usually high on fuel consumption, dirt bikes still offer better mileage compared to a similarly powered quad as they are lightweight and aerodynamically more efficient.

Even otherwise, you do not require an engine with high output power to be able to conquer off-road trails. Riders can settle for the engines with smaller displacements on their dirt bikes, and still enjoy their off-road adventures, provided the torque to weight ratio is sufficient.

— Also read: How to Prevent the Damage Caused by Motorcycle Accidents, From a Rider’s Perceptive

Quad bikes require a large engine to propel the heavy frame through the grueling conditions. The all-wheel drivetrain system is focused on power delivery only, which means fuel economy is sacrificed.